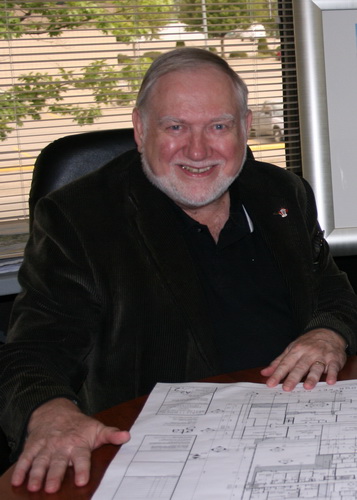 After over 50 years in the industry, John Schlosser is saying farewell, packing his bags and boarding the retirement express. John Schlosser’s last day in the trenches of GTA Engine #243 will be on June 30th, 2015. John started CanWest Design in 1975 with his high school sweetheart and wife, Gail Schlosser. He successfully operated his business until 2010, when he decided to join Garry Tomporowski Architect (Now GTA Architecture Ltd.). Over the years John has been a member of many different groups and committees. This includes such roles as President of Rotary & President of the Buildings Design Institute; he is an active member of the Autocad Users Group, as well. For many years, he sat on the Building Policy Advisory Committee on behalf of ASTTBC. John has been involved in literally thousands of projects throughout Kelowna and surrounding areas. Some of his more notable works include the Worksafe BC office building, St. Charles Garnier Parish Church and Chancery Office, and is highly involved in the development of a cutting edge, Wellness Facility to be the first of its kind in Canada.

John is also an active member of the St. Charles Garnier Parish, an avid railroad buff and a dedicated family man. What you may not know is that John is an accomplished bass player, even having spent some time in the 1970’s playing the club circuit in various establishments throughout Vancouver, and still takes some time to get together and jam with friends.

What is John going to do you ask? Some of his plans include trying out his green thumb in his wife’s garden, focus on health and wellness, and most importantly spend time with family. With three daughters, two grand children, and two great-grandchildren, John will not be without something to do.

John’s passion (his wife would say obsession) is trains and railroads. Part of his retirement plan is to complete his mini transportation system (model railroad). By mini, we mean a 50 foot by 15 foot room with 3 levels of painstakingly accurate details and totally functioning railroad empire that requires five (5) operators.

While we are sorry to see John go, Garry and the staff at GTA Architecture wish him happiness, health and continued success in all of his endeavours for what looks like a very busy retirement road ahead.